From bedrooms to kitchens and even in a tiny airing cupboard, the volunteers behind hospital radio have continued to broadcast to patients and staff in hospitals across south Wales. If ever there was a need for radio to boost spirits in hospitals, it is now more than ever.

Rookwood Sound, which broadcasts to Llandough Hospital, avoids the C-word entirely, while over on Bridgend Hospital Radio, they try to keep their listeners updated on coronavirus as much as possible.

But one thing all stations have in common is the number of requests are pouring in like never before and the two most-requested songs are David Bowie and Heroes, and The Farm with All together Now.

Not every request is "appropriate" for broadcasting on the airwaves, admits Wayne Dunkley, who presents a 70s and 80s themed show on Bridgend Hospital Radio.

"Everything is light-hearted and cheerful on the show," the 59-year-old presenter said. "The objective of the show is to play tunes that people recognise as their tune. But sometimes, when the requests come in, it's not appropriate so I have to look for a similar tune to bring that request to life." 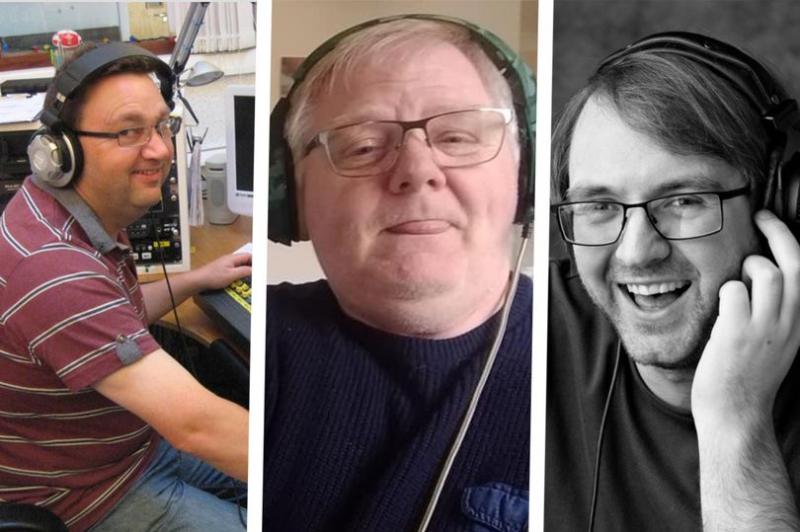 Hospital radio is a very British tradition. It is often overlooked and under-appreciated feature of our health system, yet one that so many turn to for some light relief in the darkest of times.

They are tiny operations, reliant wholly on volunteers, and few people outside of hospital know of their existence. But for Wayne, it's just about being there for patients.

"It's about giving light relief for all that's going on at the hospital," he said, talking at break-neck speed over the phone. "It's not a distraction but there's something more positive, listening to your favourite songs. You just put a smile on someone's face by putting on a record they haven't heard for a while.

"You're a friendly voice that's not telling them they are having an operation. It's just playing music and having a chat on the radio, that's all it is."

Wayne is downplaying his role and glosses over the fact that he is also the station manager and a trustee at the station, as well as a presenter.

They are roles he does willingly and without payment alongside his day job as a furniture manufacturer. He has been doing it for 25-odd years. In the early days, he was squeezed into a broom-sized cupboard that could hardly be called a studio.

"It was five foot by eight foot," he said. "When I turned round to pick a record, I would touch the wall behind me." But hospital radio has moved on from what used to resemble something out of the Carry On films.

Usually, Wayne presents his show from a modern studio at the Princess Of Wales Hospital in Bridgend, with two glass panels that look right out into the beating heart of the hospital. Although today, all broadcasting is being done from home.

"I just went into the hospital one day and noticed the radio station was there," continued Wayne. "I always had a passion for it so volunteered."

One thing he's noticed during the pandemic is lots more requests coming through than usual. As well as Bowie, he plays A Bridge Over Troubled Water a lot, a tune that has cemented itself as the unofficial NHS anthem. But for him, the challenge is never to repeat a tune.

"If someone is stuck in hospital for a week they like to hear a bit of variety," Wayne said. In keeping with the theme of his show, he adds a 70s touch by playing something like Super Trouper by Abba, which he says sends the same message.

"They don't want to be reminded that they are unwell so anything with too much of a sombre mood isn't going to cheer them up," he added. "I try and balance it and pick songs that don't have an angle. I do avoid songs that make you think too much."

With dwindling volunteers and competition from the internet, the future of hospital radio has long been seen as shaky. But there are still over 200 such stations, according to the Hospital Broadcasting Association, and during the pandemic, they have shown they are just as important as ever.

Jamie Pritchard, a presenter at Radio Glamorgan, says shows like his are an important connection between patients, staff and family at the University Hospital of Wales, in Cardiff. Jamie said: "Music is described by some as medicine, where a particular song can either take you back to a time you vividly remember, or it can introduce you to an artist you may never have heard of."

Jamie, who is also the station's chairman, joined in 2003 and is now in charge of around 30 volunteers. They have all had to adapt as lockdown forced them out of their studio. "It’s been challenging but thanks to technology and a lot of patience, we’ve all adapted fairly quickly to keep our service going during this time," Jamie said, speaking from his makeshift studio at home. His colleagues have turned their spare rooms, offices or even kitchens into temporary studios to be able to record fresh shows to be broadcast.

Jamie presents a lock-down request hour which goes out three evenings a week. "We get a range of requests from patients and their families each and every week," he said. "During lockdown especially, David Bowie – Heroes and The Farm – All Together Now have been two of the most popular tunes for obvious reasons.

"We had a request from a lady who couldn’t see her mum on her 86th birthday. She got in touch with us to ask if we could play her ‘Downtown’ by Petula Clark and wish her all the best from the family which we were able to do.

"We also had a message from a nurse who didn’t want to be named, but wanted to wish her husband a happy 10th anniversary and to play a song by Queen which again, one of the most popular bands we’re asked for overall."

For Jamie, radio is all about "escapism" and one of his main aims is to help relieve the worry and boredom of sickness.

"Knowing we’re there for someone who is currently staying in hospital, who cannot have visitors fills us all with confidence as we’re there 24/7 to keep them company and fill the void so that they don’t feel lonely or isolated when they’re not in the company of friends or family," he added.

What sets hospital radio apart from commercial radio is the intimacy between the presenters and the listeners and it provides the perfect opportunity for radio enthusiasts and budding DJs and producers to hone their skills. Indeed, it was a hospital radio station in Cardiff where Radio One's Huw Stephens cut his teeth.

Huw started his career as a DJ at Rookwood Sound and remains a patron at the station to this day. Today, Stephen Allen is the studio manager at Rookwood Sound, which broadcasts to patients and staff at the Llandough and Rookwood hospitals.

After dismantling his bed and setting up the studio in his bedroom, Stephen has been broadcasting his show from home since lockdown began. He's been doing hospital radio for 28 years, alongside a full-time job as a patient registrar for the NHS.

His fellow presenters have been known to broadcast still in their pyjama bottoms and one has even set up in a tiny airing cupboard at home. They have not let the pandemic stop them - even if it has caused a few raised eyebrows.

Stephen's neighbour did ask him if he was OK after hearing him "talk a lot" inside his home in Thornhill in Cardiff, he said.

"But then I explained what I do and showed her my set up," he chuckled.

"When you are in hospital, you can become quite institutionalised and get used to a regime. Life goes on around you and we are here as a window, bringing the outside in.

"Especially now when family members can't go into hospitals. We provide a two-way conversation between patients on the wards and people on the outside. Patients know then that people are thinking about them."

The station tries to avoid using the coronavirus word at all on the airwaves. "You hear so much about coronavirus on the news," Stephen continued. "We only talk about the good stories, like Captain Tom, or stories where people are pulling together. We don't mention the other side of it and just keep it light-hearted and entertaining. We try and play a mix of what people like."

He has noticed some of the requests and the messages coming in changing since lockdown began. "We get a lot more people saying they are missing each other or cant wait to see their loved ones," he said. He is acutely aware of the responsibility that comes with passing on those messages. It is, after all, why hospital radio exists in the first place.

"It's quite humbling to pass on those messages," he said. "It does stick with you when you go home. We are all going through a hard time right now, missing family and friends and experiencing that isolation and disconnect.

"It's not a case of playing a tune and then just moving onto the next record. It does lift you when you know it's going to lift someone's spirits. As a presenter, that's the pay back we get, knowing we are playing a tune that connects people together."