The hospital, health and wellbeing radio station for Banbury and North Oxfordshire, Radio Horton scored a milestone in its fundraising efforts over the festive season after shoppers of two Banbury supermarkets resulted in raising more than £1,000 for the station. 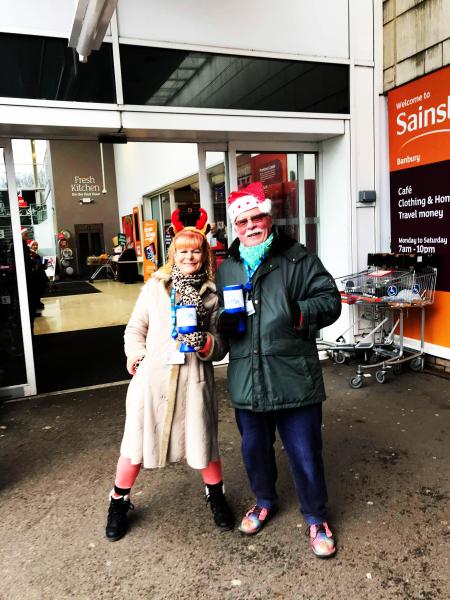 The station held its twenty-ninth Christmas fundraising collection at Sainsbury’s supermarket on Sunday 22nd December 2019, providing music and entertainment to avid shoppers in the run up to Christmas. This was combined with additional funds raised in November from the Waitrose Community Matters initiative, colloquially the ‘Green Token’ scheme at the town’s new Waitrose store.

First launched by Waitrose in 2008, the scheme has so far donated more than £14 million to local charities across the country, chosen by customers. At the end of a shop, customers receive a green token which is placed in a box of the good cause they would like to support.

The higher the quantity of tokens a cause receives, the higher the donation. Each Waitrose branch donates £1,000 between three local causes selected by customers.

Funds raised at the supermarket’s events totalled £1,036.50 and are imperative to the longevity of Radio Horton. The Banbury based charity is run by volunteers and funds will help the organisation continue to grow as it strives towards broadcasting beyond the hospital, into the wider community with a unique health focus.

Radio Horton Chairman, Anthony Brown said: “We are of course, delighted with the excellent fundraising efforts over the festive season and would particularly like to convey our thanks to shoppers of both Waitrose and Sainsbury’s for their generosity particularly at this time of year.”

“I would also extend our thanks to both Sainsbury’s and Waitrose supermarkets and our other partners who help us to raise funds through other conventions over the year”.

A new introduction for 2019 was the ability for donors to donate via contactless or debit/credit card payment. This was in the form of a QR code hosted by Good Thyngs, a service where individuals can scan a barcode using their smartphone or tablet device to make an instant payment in a variety of methods including Apple Pay®, Google Pay® or debit/credit card.

Brown enthuses “We understand that in this digital era, an increasing volume of people tend not to carry cash but instead make transactions using their phone or contactless payment card. We decided to embrace the technology from Good Thyngs which has already proved both convenient and popular with donors.”