Tarka Radio is Back On The Map

Founded in 1981 and based at the North Devon District Hospital in Barnstaple, Tarka Radio has, it is fair to say, until about three years ago, been in tick over mode for several years, due primarily to low member numbers and a set of challenges that were beyond the power of the small team. 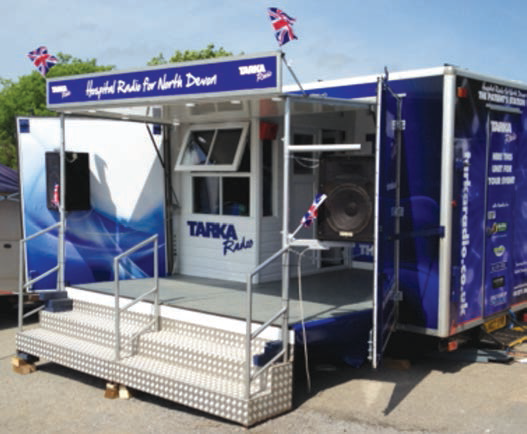 However, in 2010 a few key former members returned to the fold with the express intent to turn things around and ensure the future of the station. We are delighted to report that things at Tarka Radio are now looking very different to the way they were. A priority for the team was to put the house back in order and then raise awareness of the work that we do.

A key move to attract new members, to increase awareness and to raise the ever much needed funds was to look for a suitable vehicle for conversion for use for outside events. We previously had a small tow-a-van that we used back in the 90’s to provide PA for local charitable events, etc and although this unit had long ago departed for the scrap yard as no amount of surgery would have saved it from its inevitable fate!

In 2010 we were fortunate to acquire a former fast food trailer, which had then been converted for promoting agricultural supplies at shows but had subsequently become obsolete.

Although in a sorry state, it was structurally sound and as we had every intention of ripping it apart to make it suitable for our requirements, most of the tatty stuff was removed and thrown in the skip in the very early stages of conversion. Three members of our team spent over 2000 man-hours on the conversion, which was completed in the spring of 2012.

The unit now has a good size stage (suitable for a four piece band) and features a studio/sound control room and meet and greet area. The new Tarka Radio Outside Events Unit (OEU) has become a tremendous asset and has enabled us to build strong relationships with local organisations such as Lions Clubs and other charities who are keen to have access to an affordable unit to promote their event. We are now entering our third season of events for the OEU and the diary is filling up fast. 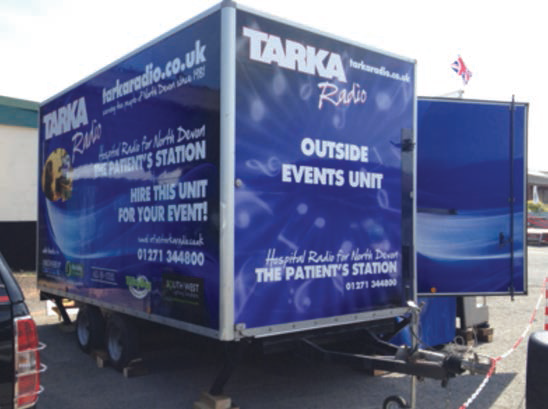 An essential tool in achieving our objectives, was to build a completely new website (previous versions having been a bit basic, to say the least!). The new site is bright and interactive and in addition to member’s details, programme schedule and station information is regularly updated with our forthcoming events and photos and reports of those events afterwards.

A key part of the website is, of course, to attract new members, which has been very effective and we are now operating at around 20 members. In 2010 our broadcast hours had dropped to around 15 hours of live programmes a week, we have now increased this to over 60 hours in addition to our automated service Tarka Radio 24/7.

Whilst our studio equipment is far from the latest (our desks were purchased in 1990!), the difference being that nowadays they are linked to computers and CD players rather than a couple of turntables! We have recently undertaken some work to update the equipment we have and to upgrade our second studio to the same level as our main studio.

Another key move to putting us back in the public eye (or maybe ear!) was the introduction of our on-line streaming service in January 2013. This has enabled us to promote our service to a wide audience, allowed patients’ relatives to hear their requests being played for their loved ones and also to listen to our programmes and helped to encourage support from the community. Our programmes are now streamed 24/7 and can be heard through the ‘listen now’ section of our website.

We are delighted to report that whilst Tarka Radio has floated around the middle ground in the Hospedia ratings for our hospital for years, we have been at the number one position for four consecutive months now and by a huge margin so all our efforts are paying off!

We are keen to become more active participants in HBA activities now that we have turned things around.

We are looking forward to another busy year with some more potentially exciting projects around the corner. We welcome communications from other HBA members (contact from our website).