There was a distinct party atmosphere on 27th September 2013, when Radio Wulfrun commenced its 30 hour Marathon Broadcast to celebrate its 30th Birthday.

The beginning was marked at 12 midday with ‘Music for the Royal Fireworks’ by George Fredrick Handel, followed by the all star recording of the late Lou Reed classic ‘Perfect Day’.

Radio Wulfrun began life back in 1983 and was the brainchild of Alan Price and a dedicated team of volunteers who saw a need for a service that would entertain the patients at New Cross and the (now defunct) Royal Hospital in Wolverhampton. Such was the enthusiasm that with the help of various businesses within the town (prior to its current City status), the project came to fruition and the station went on air in late September 1983. 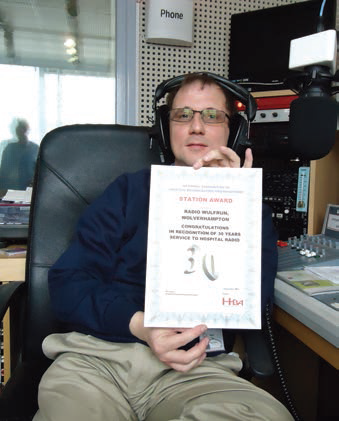 Fast forward 28 years... several volunteers, four Chairmen (including Richard Stanton - left) and a new purpose built studio complex... and in a Committee meeting in early 2011, plans were looked at and ideas drawn up as we began to discuss ways of marking the big Three Zero.

With time on our side, we began to look at inviting as many previous members back as possible for a 30th Birthday Party as well as a 30 Hour broadcast to raise funds, awareness and to celebrate this milestone.

With the help of the local newspaper, we were able to reach out to those we could not contact direct and plans came together under the curatorship of Timothy Dews, our Vice Chairman. 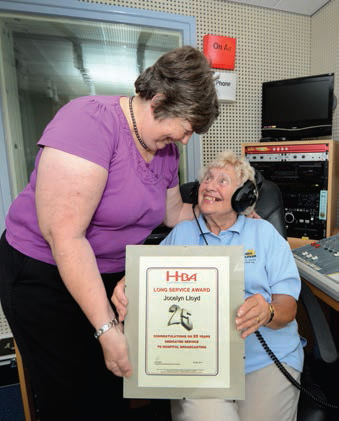 By midday on 27th September, we were ready to begin with the knowledge that 30 hours would soon pass in the blink of an eye. As Chairman, I opened the proceedings with the tracks outlined and then looked forward to the first two hours. I hasten to add that I had an experienced copresenter in June Snowden, who joined us for most of the first day of the broadcast. June was an excellent guest both as an interviewee and as a fellow presenter. The story of her beginnings in hospital radio and her experiences and subsequent role as President was a joy to listen to. We also had a visit from our patron, Baroness Heyhoe-Flint, who joined us from 1.15pm onwards ... finally, after 26 years in hospital broadcasting, a President and a Baroness (not only from the House of Lords but also a Member of MCC Lords). Was this my highlight in broadcasting? All this and the local newspaper’s photographer as well as Jocelyn Lloyd’s 25 Year certificate presentation (right) and the Station’s 30 Year certificate.

I must add that a number of members were also present from the start and I thought at one point with about seven people in the studio this was like tardis-type 40.

At 2pm, I handed over to Michael Byrne, our Training Officer, who took the first requests from Programme Assistants Joyce Cull (Sunday Morning presenter) and Peter Lloyd, our Treasurer.

Following the departure of Rachael to another engagement and with stomachs beginning to rumble, we settled down to afternoon tea which had been arranged by Jocelyn Lloyd, a presenter and our Recruitment Officer and included sandwiches, cakes, scones as well as countless other delights, leaving everyone feeling well satisfied.

June was able to be with us until late afternoon and then those members who were not available earlier began to arrive, starting with Huw Griffith, our Anglo-Welsh presenter, who also collects requests, which is not out of the ordinary apart from the fact that he is wheelchair bound but this does not stop him from taking an active role within the station.

Taking us into the evening and past the Witching Hour were John Romney, Presenter and Programme Assistant and Nigel Byard, Presenter and an original member who after some years away decided to re-join us. Both were used to Fridays as their normal slot but as John remarked later, it was strange to do from midnight until 1am when being used to broadcasting from 7- 8pm every week.

As anyone who has ever done a broadcast such as this will realise, the star is the volunteer who is prepared to sign up to the overnight shift, aka 1am-6am. Step forward Mark Chapman, presenter and engineer, and Michael Byrne, who came back for a second bite of the cherry.

I cannot thank them enough as this is always the slot everyone tries to avoid. From feedback, I am aware both enjoyed the experience even when Mark was attending a function on the Saturday evening and Michael had yet to get any sleep having been up for about 27 hours.

Their stint coming to an end and the rising of the sun heralding a new day signalled me to return for early breakfast from 6am-9am clutching a large cup of very strong coffee. Commencing with ‘Mornin’ by Al Jarreau, ‘The R4 UK Theme’ and finally ‘Morning Dance’ by Spiro Gyra saw the programme start on an upbeat and bright note.

By 6.15am all thoughts of early starts were banished and a highway of music stretched ahead with only the knowledge that a combination of genres would mix until 9am. By 8.40am it was good to see Dave Ward, my old sparring partner from Wednesdays, enter the building and prepare for his programme at 9am.

With breakfast done and the dishes metaphorically stacked away, the airwaves were Dave’s as his ‘Midweek Melee’ morphed into his ‘Saturday Morning Brunch’, complete with muffins and brioche. As his programme began to track to noon, he was joined by Anne Barrett and guests Adam Ward (yes, Dave’s Son) and Jamie Angus, not only a good friend of Adam but also a work colleague of mine (it was his photographs which add to the rumour that I missed out on a breakfast treat!).

Throughout these hours, requests were coming in via our programme assistants and the variety of music as always provided a patchwork of styles and decades that make up hospital radio.

As noon approached and we moved into Day Two, Jocelyn Lloyd took her place to steer Wulfrun through until 3pm. Again requests would be the main ingredient, this time collected by Alma Platt and Peter Lloyd but also there would be ‘The Vintage Comedy Slot’ as well as Andre Rieu taking centre stage as the featured artist. Jocelyn’s style of modern tracks segued with Big Band classics meant Saturday lunchtime was a mix of something old and something new.

By 3pm, we were within touching distance of completion of our 30 hours and the baton was passed to Timothy Dews, our Vice Chairman, and Secretary. Once again we had a great response on requests and Tim slotted all the components of his programme together with a sprinkling of old favourites, as well as classic and contemporary folk, his speciality.

As we entered the last hour, we drew the strands together playing folk and country music and announced all the winners of our prize draws throughout the Radiothon.

The final song played was fitting in its own way. We had begun with ‘Perfect Day’ and the hopes that the whole endeavour would be a fitting celebration to all our current and past members, some sadly no longer with us. To conclude with Nanci Griffith singing ‘From A Distance’ brought the entire venture full circle. The spirit embodied in hospital broadcasting borne out in the lyrics of Julie Gold. 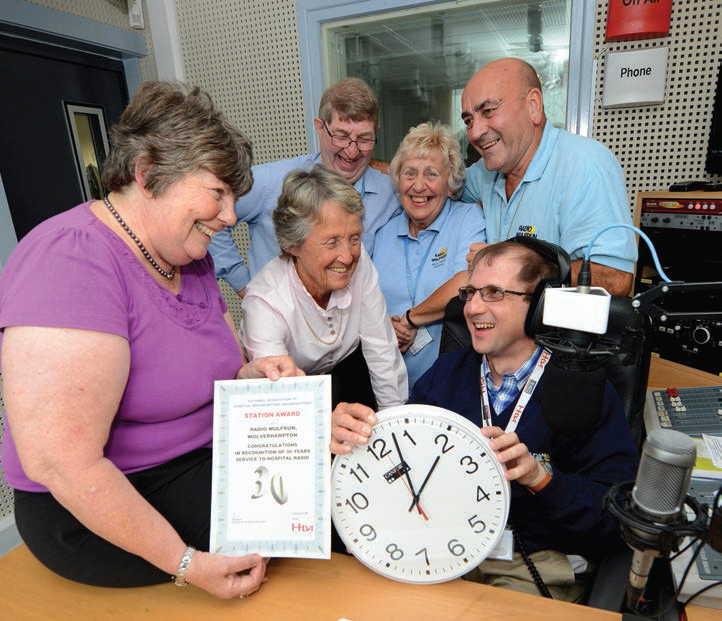 The following weekend saw many previous members join us to celebrate this milestone with a special party to remember the last three decades. This was a time for recollections, memories and looking back on good times. It was also a time to reflect on the whole ethos of Radio Wulfrun and the original team who made it possible.

In conclusion, thank you to all our members who took part and to those who have given their time in being part of The Radio Wulfrun Story. Happy 30th birthday Wulfrun.